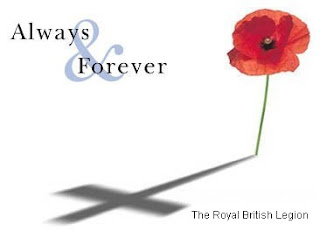 Sale in my store will be for 1 day only.

The following is from poppy.org.uk

11 November 1918 signalled the end of The Great War; the Armistice between the Allies and Germany came into effect. Since 1921, the nation has come together to remember the sacrifices that hundreds of thousands of British and Commonwealth Service men and women made not just during the Great War, but World War II and all subsequent wars and conflicts including Iraq and Afghanistan.
To salute all these heroes and express gratitude this Remembrance Day, The Royal British Legion is planting a "Flanders' Field" of Poppies beside the Menin Gate in Ypres.
Our online orders for Flanders' Poppies is now closed.
A photo gallery of previous Flanders' Fields of Poppies is available on the main Legion website.

IN FLANDERS FIELDS
by John McCrae
In Flanders fields the poppies blow
Between the crosses, row on row,
That mark our place: and in the sky
The larks, still bravely singing, fly
Scarce heard amid the guns below.
We are the Dead. Short days ago
We lived, felt dawn, saw sunset glow,
Loved, and were loved, and now we lie
In Flanders fields.
Take up our quarrel with the foe:
To you from failing hands we throw
The torch; be yours to hold it high.
If ye break faith with us who die
WE SHALL NOT SLEEP,
THOUGH POPPIES GROW
IN FLANDERS FIELDS.

Email ThisBlogThis!Share to TwitterShare to FacebookShare to Pinterest
at 9:10 am